The case ofÂ Plas-Pak Indus. v. Sulzer Mixpac AG, 600 Fed. Appx. 755 (Fed. Cir 2015) provides an example of this principle (it also discloses another basis to challenge an obviousness rejection). Sulzer asserted that claims of Plas-Pak’sÂ US Patent 7,815,384 (â€œPlas-Pakâ€™s Patentâ€) were obvious in view of a combination of two references, U.S. Patent 6,241,125 (â€œJacobsenâ€) and U.S. Patent Publication 2002/0170982 (“Hunter”). Plas-Pakâ€™s Patent was directed to a device and method for mixing and dispensing multi-component paints. 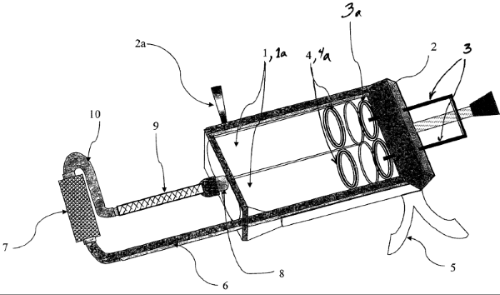 Jacobsen discloses a device that dispenses fluid materials into a surface crack so as to minimize leakage. Sulzer proposed to modify the device of Jacobsen to include the spray nozzle from Hunter.Â

But the court found that the spray nozzle of Hunter would not obtain the objective of dispensing fluid materials into aÂ Â surface crack so as to minimize leakage.Â

The court noted thatÂ Jacobsen’s dispensing system, partially shown in figure 9 below, has the very “specific function of dispensing fluid materials directly into surface cracks to minimize leakage.” The court found thatÂ Jacobsen’s repeatedly recites this limited purpose. Further,Â Jacobsen did not teach how a spray nozzle might accomplish the “intended purpose” of “dispensing fluid materials directly into cracks.”

Therefore the court concluded that modifying Jacobsen to accommodate the spray nozzle of Hunter would render Jacobsen “inoperable for its intended purpose,” and a person of ordinary skill would thus not have been motivated to pursue the combination. As a result, theÂ court concluded that the challenged claims of Plas-Pakâ€™s patent were not obvious.

When an obviousness rejection is received, you must closely study the modified reference to determine whether the proposed modification would render itÂ inoperable for its intended purpose. If it would, then the rejection may be improper and can be overcome on that basis.