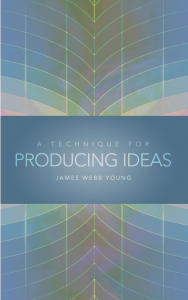 â€œAfter experiencing a desire to invent a particular thing, I may go on for months or years with the idea in the back of my head,â€ said Nikola Tesla. Tesla calls this the incubation period, which precedes direct effort on the invention. Science writer, Steve Johnson, called thisÂ a slow hunch. And, in his 1940 publication, AÂ Technique for Producing Ideas, James Young also calls it incubation as a part of the metal digestive process.

Young lays out a five step process for producing ideas. He says that:

Young asserts the an idea “is nothing more or less than a combination of old elements.” He continues “the capacity to bring old elements into new combinations depends largely on the ability to see relationships.”

The first step is to gather raw material. Young says that we constantly try to dodge the work of gathering raw material because its “a terrible chore.” You should gather both material specific to the problem at hand and general material.

Regarding general material, wide curiosity and exploration of the world is the rule. Galileo’s invention of the pendulum clock was the product of Galileoâ€™s experiences and cross-disciplinary studies over 58 years. Similarity, Young says every really good creative person in advertising (his field) has two notable characteristics:

“First, there was no subject under the sun which he could not easily get interested…Every facet of life has fascination for him. Second, he was an extensive browser in all sorts of fields of information.”

“The more of the elements of that world which are stored away in that pattern making machine, the mind, the more chances are increased for the production of new and striking combinations, or ideas.”

The material gathering is a life long job.

In the second step, you actively work the information over in your mind. “What you do is to take the different bits of material which you have gathered and feel them all over…with the tentacles of the mind.” He says after a while you will reach a hopeless stage where “Everything is a jumble in your mind, with no clear insight anywhere.” This is where you move to the third step.

Step 3:Â Incubation, Put It Out of Your Mind

In the “third stage you make absolutely no effort of a direct nature” and put it out of your mind. This is the step where Tesla describes he Â “may go on for months or years with the idea in the back of [his] head.” Young says “What you have to do at this time, apparently, is to turn the problem over to your unconscious mind and let it work while you sleep.”

Young says that if you really did steps 1-3 properly, in the fourth step, the idea will seem to appear out of nowhere. It will come to you when you are least expecting it.

In the last step you refine the idea to work in the real world conditions and constrains at issue.

While Young’s field is advertising, the process appears applicable to idea generation generally. Read Young’s full work for more details on the process and stories that accompany it.