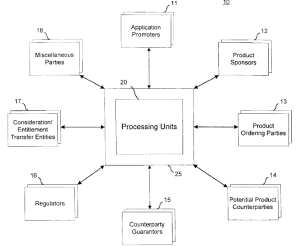 CLS sued Alice for declaratory judgement thatÂ  U.S. Patent No. 5,970,479, 6,912,510, 7,149,720, and 7,725,375 owned by Alice were invalid, unenforceable, or otherwise not infringed. The district court held that each of Alice’ s patents were invalid under section 101 for failure to claim patent eligible subject matter. The Federal Circuit reversed maintaining a broad view of patentable subject matter.

(a) creating a shadow credit record and a shadow debit record for each stakeholder party to be held independently by a supervisory institution from the exchange institutions;

(b) obtaining from each exchange institution a start-of-day balance for each shadow credit record and shadow debit record;

(c) for every transaction resulting in an exchange obligation, the supervisory institution adjusting each respective partyâ€™s shadow credit record or shadow debit record, allowing only these [sic] transactions that do not result in the value of the shadow debit record being less than the value of the shadow credit record at any time, each said adjustment taking place in chronological order; and

Manifestly Evident Test.The Federal Circuit found that the district court took too narrow a view of patent eligible subject matter . The Federal Circuit introduced a new manifestly evident test which provides, “when–after taking all the claim recitations into consideration–t is not manifestly evident that the claim is directed to a patent ineligible abstract idea, that claim must not be deemed for that reason to be inadequate underÂ  Â§ 101.” The court continued, “It would undermine the intent of Congress to extend a judicially-crafted exception to the unqualified statutory eligibility criteria of Â§ 101 beyond that which is ‘implicitly’ excluded as a ‘fundamental truth’ that is ‘free to all mend and reserved exclusively to none.’ ” (citing Bilski v. Kappos, 130 S. Ct. 3218 (2010)).Â  The court further stated that “Unless the single most reasonable understanding is that a claim is directed to nothing more than a fundamental truth or disembodied concept, with no limitations in the claim attaching the idea to a specific application, it is inappropriate to hold the claim is directed to patent ineligible ‘abstract idea’ under 35 U.S.C. Â§ 101.”

The Federal Circuit found that the claims of the ‘720 and the ‘375 Patents each had explicit machine limitations. â€™720 Patent col.65 ll.42- 48 (â€œA data processing system . . . comprising a dataÂ  storage unit . . . ; and a computer . . . .â€); â€™375 Patent col.68 ll.5-7 (â€œA computer program product comprising a computer readable storage medium having computer readable program code embodied in the medium . . . .â€). The court found these machine limitations could not be ignored and they were not “insignificant post solution activity.”

Electronic Adjustment Implicates a Machine. Regarding the method claims of the ‘510 patent, the Federal Circuit found that they each provided an “electronic adjustment” limitation, which implicated a machine under the machine-or-transformation test.Â  The court noted that the CLS agreed that the electronic adjustment required a computer, which was consistent with the patent specification.

Shadow Credit Record Implicates a Machine. Regarding the method claim of the ‘479 patent recited above, the court noted that the claims did not have the “electronic adjustment” limitation, but the claims did contain a “shadow credit record” and a “shadow debit record”, which when read in light of the specification, required a computer implementation. As a result the “shadow credit record” and “shadow debit record” where sufficient to implicate a machine under the machine under the machine-or-transformation test.

Dissent. Judge Prost criticized the majority’s manifestly evident test. The dissent asserted that the claims were merely directed to the basic idea of using an intermediary in a financial transaction, which the dissent noted existed since the Early Roman Empire. The dissent asserted that the representative claim 33 of the ‘479 patent involves four simple steps: (a) creating a debit and credit account for each party, (b) checkingÂ  the account balances in the morning, (c) adjusting the account balances through the day, and (d) paying the parties at the end of the day if both parties have performed. The dissent dismissed any patentable significance being attached to “shadow records.” The dissent asserted that shadow records are simply used to define an account that is used to ptrack a party’s payments and that any financial intermediation would do this.

The Dissent further noted that the invention is focused on the financial transaction and not the computer implementation. The dissent noted that the ‘disclosure of the invention” section ofÂ  the ‘720 Patent almost exclusively discusses the concept of risk minimization in financial transactions. There are no statements that the computer implementation is an advancement in the art and instead provides that the object of the invention can be “achieved by a computing/telecommunications infrastructure that is capable of being accessed worldwide by any enterprise/individual having access to a computer and a telephone network.” The dissent asserts that the rest of the specification is devoid of any teaching for how one implements computer systems.

Focus on Whether Inventive Aspects are Abstract. The Dissent asserts that “we must look beyond the non-inventive aspects of the claims and ask whether the remaining portion is and abstract idea.”