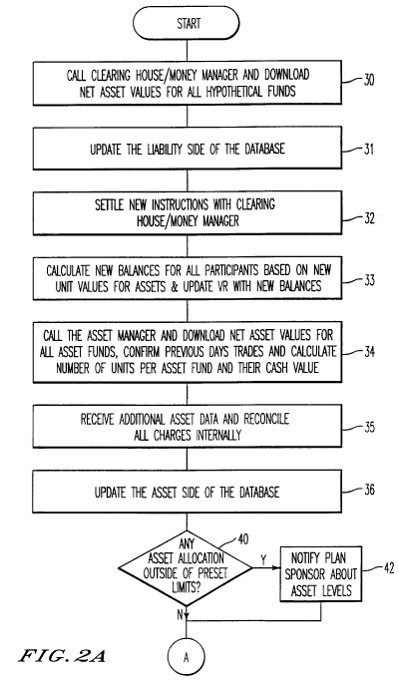 Bankcorp sued Sun alleging infringement of U.S. Patent 5,926,792 and 7,249,037. The patents are directed to methods and systems for administering and tracking the value of life insurance policies.Â  The district court found both patents invalid as claiming an unpatentable abstract idea under section 101. The Federal Circuit agreed.

Background: Life Insurance Policies. The claims are directed to dealing with a particular type of life insurance plan where the policy owner pays additional premiums beyond that required to fund the death benefit and specifies the type of investment assets in which the additional premiums are invested. This arrangement provide certain tax-advantages. However, the value of this type of policy will fluctuate with the market value of the underlying assets, which may pose an accounting problem for owners that must report the values of such policies on a quarterly basis. To address this fluctuation, a third-party guarantor is brought into the mix to guarantee a given minimum book value on the policy.Â  The patents are directed to methods and systems that use a formula for determining the values required to manage a stable value protected life insurance policy.

Representative claim 9 of the ‘792 patent provides:

9. A method for managing a life insurance policy on behalf of a policy holder, the method comprising the steps of:

generating a life insurance policy including a stable value protected investment with an initial value based on a value of underlying securities;

calculating fee units for members of a management group which manage the life insurance policy;

determining an investment value and a value of the underlying securities for the current day;

storing the policy unit value for the current day; and

one of the steps of:

Use of a Computer Also Not Determinative. The court stated, “To salvage an otherwise patent-ineligible process, a computer must be integral to the claimed invention, facilitating the process in a way that a person making calculations or computations could not.” The court found that the computer required for some of the claims of the Bankcorp patents were employed only for the computer’s most basic function, “the performance of repetitive calculations,Â  and as such does not impose meaningful limits on the scope of those claims.” The court continued to find there was no material difference between the claims invalidated by the Supreme Court in Bilski and the claims in the present case.Â  Further the court stated, using a computer to accelerate a patent ineligible mental process does not make that process patent-eligible.

Focus on Whether Inventive Aspects are Abstract. The court noted that when insignificant computer-based limitations are set aside from the claims, the question under section 101 reduces to an analysis of what additional features remain in the claims.Â  The court found that without the computer limitations nothing in the claims remained but the abstract idea of managing a stable value protected life insurance policy by performing calculations and manipulating the results.As a result the claims of the patents were invalid as directed to unpatentable subject matter.

Distinguishing CLS Bank v. Alice. The court distinguished its prior decision in CLS Bank International v. Alice Corporation, Dkt No. 2011-1301 (Fed Cir. July 9, 2012), because in CLS the court found that the computer limitations of the claims played a significant part in the performance of the invention.