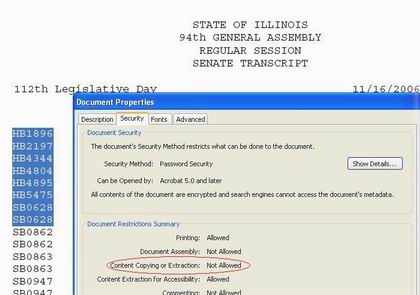 Wired reports on Steve Jobs’ Open Letter where he announces Apple supports a DRM-free music distribution model. Many, including Bill Gates, have stated that DRM does not stop piracy. And some have argued that Apple benefits from DRM because it locks users into only using iPods and iTune.

Jobs acknowledged “DRMs haven’t worked, and may never work, to halt music piracy.” But he does not believe users are locked into using music players from one company when they buy DRM music from that company’s online music store. He stated:

He points out that 90 percent of songs are sold on CDs that are not DRM protected. After asserting that DRM does not appear to be good for much. Jobs states:

If anything, the technical expertise and overhead required to create, operate and update a DRM system has limited the number of participants selling DRM protected music. If such requirements were removed, the music industry might experience an influx of new companies willing to invest in innovative new stores and players. This can only be seen as a positive by the music companies.

He concludes by asking those against DRM to focus on the convincing Universal, Sony BMG, Warner and EMI to license music without DRM.

Will this announcement move the marketplace towards a DRM-free model? Bill Gates criticized DRM, yet Microsoft’s new music player the Zune and the Zune Marketplace operate as a closed DRM protected system much like Apple’s iPod/iTunes combination.

The governments of Norway, Denmark, Sweden, France, Germany, Finland, and the Netherlands have “rebelled” in some form against Apple’s DRM system that prohibits users from playing a song downloaded from iTunes on a music player other than an iPod. It will be interesting to see if European authorities take Job’s invitation to “redirect their energies towards persuading the music companies to sell their music DRM-free.”

Cnet reports a spanish startup company called Whisher is trying to offer an easy way to share Wi-Fi Internet access. They hope that broadband consumers will share access to their connection with others via the consumer’s existing Wi-Fi router. If large numbers of broadband customers share their connection then a mesh Wi-Fi network will develop without municipal or commercial development.

The Cnet article stated the snag in this utopian view of free Wi-Fi for everyone is that “[i]n the U.S., it’s illegal.” Illegal? On July 8, 2005, Cnet ran an article titled “FAQ: Wi-Fi mooching and the law” indicating it is not clear whether or not sharing Wi-Fi is legal. The article stated, “It depends on the wording of your contract with your broadband provider.”

Law.com’s legal dictionary defines “illegal” as “1) adj. in violation of statute, regulation or ordinance, which may be criminal or merely not in conformity. . .”

If the contract with your broadband provider prohibits you from sharing the connection outside of your residence, then you would be in breach of the contract if you shared in that way. While you may be liable—meaning required to pay money to the provider—for violating the contract, it is not generally considered “illegal” to breach a contract. It would be illegal if a statute, regulation or ordinance prohibited you from sharing the connection outside of your home. I am not aware of any statute, regulation or ordinance specifically prohibiting such sharing (although one could exist).

Contract law does not seek to punish the breaching party but instead generally seeks to put the non-breaching party in the position he or she would have been in if the contract was performed without breach. Therefore a party breaking an private agreement (i.e. the one between you and the broadband provider) is treated much differently under the law than a party violating a statute, regulation or ordinance. The former conduct is considered breaching, while the latter is considered illegal.

It is important to use the right terms when discussing this topic. The term “illegal” implies the power of the State is used to prohibit conduct. It does not seem like this is the case when someone share’s their broadband connection. I am interested to know if there are any statutes that prohibit this sharing. In the absence of a statute or regulation, it seems that broadband sharing, at most, is a breach of contract—which still might cost you a lot of money.

A number of sites reported [Gizmodo, Slashdot, Glading, Techbuzz, Wired, Ars Technica] Pirate Bay’s announcement that it wants to buy its own island nation to avoid those pesky copyright laws. Pirate Bay started a donation drive to purchase the man-made island called Sealand. Ars Technica‘s article provides the most detailed coverage of the situation. The island is a “World War II-era British naval platform sitting in the sea off the coast of Harwich in southern England.” Sealand has a website explaining its history. The site states:

Sealand was founded on the principle that any group of people dissatisfied with the oppressive laws and restrictions of existing nation states may declare independence in any place not claimed to be under the jurisdiction of another sovereign entity. The location chosen was Roughs Tower, an island fortress created in World War II by Britain and subsequently abandoned to the jurisdiction of the High Seas. The independence of Sealand was upheld in a 1968 British court decision where the judge held that Roughs Tower stood in international waters and did not fall under the legal jurisdiction of the United Kingdom.

Torrent Freak provides a list of alternative island nations that might work if the deal with Sealand doesn’t fly.

It seems that a company called Havenco is already (or has in the past) providing webhosting from Sealand. Havenco states “HavenCo provides a place for secure e-Commerce, privacy-protected Internet services and uncensorable free speech.” Uncensorable free speech? This is the same type of argument that Yahoo made in 2000 to a French Court. There, the French court ordered Yahoo to block Nazi goods from appearing for sale on web pages in France. Yahoo’s servers were not in France. But as Tim Wu explained in a Legal Affairs article, the plaintiff showed that Yahoo could identify and screen users by geography. Yahoo eventually complied because it had assets in France that were at risk of seizure.

Whether its HavenCo or Pirate Bay operating on Sealand or some other micronation, it is doubtful that a rouge company can escape influence of “U.S. content owners.” Pirate Bay needs internet access, right? Otherwise only those people that fly in and live on the island can partake of the content on Pirate Bay’s servers. Looking at the Sealand platform, I’m not sure people will be beating down their door to live there. Plus the platform’s size means only a limited number of people could fit on it. So, Pirate Bay will need a company in some other nation to provide a connection to the internet. The connection could possibly come from England because England is close to Sealand.

That job (of prosecuting file-sharers) shouldn’t be ours – it should be done by the gatekeepers of the Web, the Internet Service Providers, who unquestionably have the technical means to deal with copyright infringement if only they would take responsibility for doing so.

According to HavenCo “Sealand currently has no specific regulations regarding patents, libel, restrictions on political speech, cryptography, restrictions on maintaining customer records, DMCA or music sharing services.” But as the Yahoo case shows, that may not matter. Even Bill Gates criticized DRM, but unless you want to live on Pirate Bay’s island, the pirate’s treasure is probably not going to be accessible to you via the internet from treasure island for long.

What should we do to free our planet from terrorism?

Human society, from origin until now, has always been at war within and between groups and has led to two World Wars. Presently, terrorism and low intensity warfare are affecting many parts if the world.

As the current global population of 6 billion increases to 8 billion by 2025, national and international conflicts will continue to be a source of concern for humanity. When evil minds combine, good minds have to work together and combat. In this context, what are the out-of-the-box solutions to free the planet earth from terrorism? Your answers when processed and implemented can lead to a peaceful, happy and safe planet earth.

When is the last time your elected official asked you for your ideas on solving problems in United States or the World?

Adriana at I Heart Tech posted about an email she received that was an electronic handwritten note. She received it on her Treo. All it said was “<Handwritten Content>.” So she tried another email application on her Treo and she was able to view the GIF file that was the electronic handwritten note. She showed it to her friend who said, “Whoa – that’s so much more personal than a regular email!” The note was written using a tablet PC.

I agree the electronic handwritten note is more personal than a regular email. I don’t have a tablet PC and I prefer to type anything rather than write it out by hand. But considering the impact of handwritten notes, I use them in certain circumstances.

I wonder whether sending a message as an attached graphic file might risk the possibility that the recipient cannot open it. Like when Adriana initially was only able to see “<Handwritten Content>.” What if the recipient was not as tech savvy or not otherwise able to open the note in their mobile device? Maybe he or she would wait and open it later on a PC.

The impact of a handwritten note probably outweighs the risk of non/delayed-receipt.