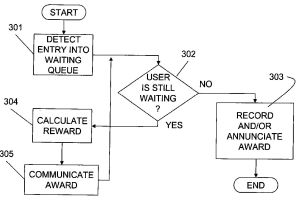 A statement in a IBM patent application caught my eye and made me wonder whether the yet-to-be-released-results of the Federal Circuit’s en Banc rehearing of In re Bilski [Patently-O’s coverage] could effect the patentability of the claims in this application. In Bilski the court will consider, among other things, whether a method or process must result in a physical transformation of an article or be tied to a machine to be patent-eligible subject matter under section 101.

The IBM patent application involves a method of reducing waiting-customer dissatisfaction by monitoring a waiting queue, calculating rewards based on the wait, and communicating the reward to the customer. A customer may be waiting on the phone, or at recreational, restaurant or lodging facilities. The IBM application provides, “although the concepts of the present invention are exemplarily discussed above as having been implemented as an automated system on a computer . . . [the] concepts of the present invention could be implemented completely devoid of computerization or automation of any kind.”

However, it is important to focus on what the application claims. Here, claim 1 provides:

The IBM claim requires at least one of the steps to be automated–as for example–embodied in a computer, whereas claim 1 of Bilski does not:

Its not clear why Bilski did not add the requirement that a step be automated.