For an example of this principle, consider the case of Depuy Spine, Inc. v. Medtronic Sofamor Danek, Inc., 567 F.3d 1314, 1328 (Fed. Cir. 2009). There, Depuy Spine sued Medtronic Sofamor Danek for infringement of U.S. Patent No. 5,207,678 (“the ‘678 patent”). The ‘678 patent is directed to a pedicle screw used in spinal surgeries. A jury determined that Medtronic infringed the patent and awarded $149.1 million in lost profits damages for the sale of pedicle screws.

The court noted, “A reference may be said to teach away when a person of ordinary skill, upon reading the reference, would be discouraged from following the path set out in the reference, or would be led in a direction divergent from the path that was taken by the applicant.” The court further said, “An inference of nonobviousness is especially strong where the prior art’s teachings undermine the very reason being proffered as to why a person of ordinary skill would have combined the known elements.”

Puno disclosed a polyaxial pedicle screw assembly that had all of the parts of the relevant claim except a “compression member” for pressing the screw head 30 against the receiver member 23. But Puno described that its design achieved a “shock absorber” effect allowing for some motion between the anchor seat 23 and the vertebrae (see fig. 7 below). The lack of a compression member allowed the shock absorber effect. Puno described that the shock absorber effect “prevent[s] direct transfer of load from the rod to the bone-screw interface prior to achieving bony fusion, thereby decreasing the chance of failure of the screw or the bone-screw interface.” 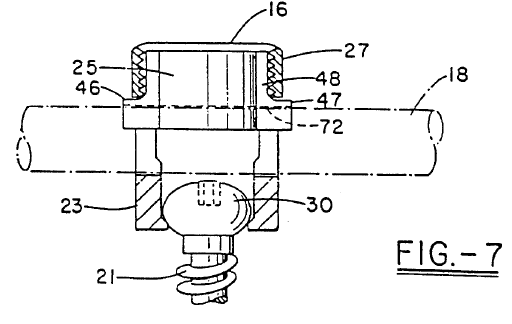 Therefore, Puno taught away from the use of a compression member, which would have increased rigidity, decreased the shock absorber effect, and possibly increased the chance of failure of the screw or the bone-screw interface according to Puno. The court concluded, due to the teaching away, a person of ordinary skill would have been deterred from combining Puno and Anderson in the manner that Medtronic proposed. As a result, the challenged claim of the ‘678 patent was not invalid as obvious and the infringement judgement was upheld.

When receiving an obviousness rejection, the cited references relied on in the rejection should be studied to determine whether they teach away from the combination. If there is such as teaching away, then a response may be filed with the USPTO arguing against the obviousness rejection on that basis.