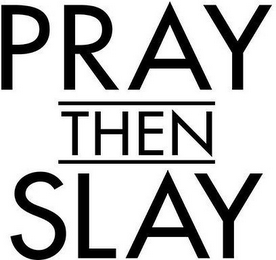 When considering whether two trademarks are similar for conflict purposes, the marks are considered in their entireties, including their appearance, sound, and commercial impression. Sometimes one of those attributes stands out to distinguish the marks even when similarities exist in the other attributes.

Manuel Tellez applied to register the mark SLAY OR PREY for apparel. The USPTO Examining Attorney refused registration based on a likelihood of confusion with Registration no. 5,066,234 for the mark PRAY THEN SLAY (and design) for t-shirts.

On appeal, the Board reversed the Examining Attorney’s refusal to register, finding the two marks had sharply different meanings.

The Board acknowledged that the appearance and sound of the marks were somewhat similar because (1) the marks shared the term “slay” and (2)Â “pray” and “prey” of the marks were phonetically equivalent and visually similar. Yet, the Board said that consumers would read and recognize “prey” and “pray” as sharply distinct words.

After reviewing dictionary definitions, the Board stated:

“…Applicantâ€™sÂ mark most likely gives the impression of presenting a choice to either kill or becomeÂ a victim by falling prey to a predator. By contrast, we find that the registered markÂ most likely conveys a command to first confer with the divine through prayer, andÂ next to impress others (the slang meaning of â€œslayâ€ [which isÂ â€œto impress strongly; overwhelm, especially by humor: Your jokes slay me.”]). The mark may suggest thatÂ prayer will lead to making a strong impression on others â€“ i.e. if you pray, then youÂ will slay.Â Alternatively, Registrantâ€™s mark could be viewed as a call to faith-inspiredÂ violence â€“ i.e. to pray and then slay, in the traditional sense of the word.”

Let’s hope that the registrant was intending the slang meaning of slay.

The sharply different meanings of the marks were enough for the Board to conclude there was no likelihood of confusion between the marks.