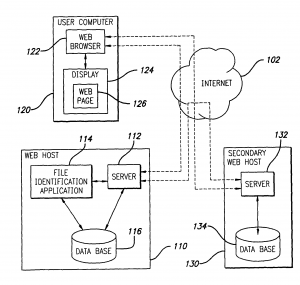 Intellectual Ventures I sued Erie Indemnity Company for infringing U.S. Patent No. 7,757,298 (the ‘298 patent). The ‘298 patent is directed to a method and apparatus for identifying and characterizing errant electronic files. It seeks to improve the prior art byÂ providing aÂ method and apparatus to detect â€œundesirable filesâ€ (such as copyrighted music files) â€œstoredÂ on computer storage devicesâ€ â€œaccording to pre-set criteria.â€

Claim 1 provided three section criteria, “any one ofÂ which may be used to identify errant files, with selectionÂ based on: (1) size, i.e., ‘whether an aggregate size ofÂ plural identically-sized files exceeds a predeterminedÂ threshold,’ …Â (2) content, i.e., ‘whetherÂ content . . . matches a [certain] file type,’…Â and (3) naming convention, i.e., ‘whether the fileÂ comprises data beyond an end of data marker.'”

One factor the court considers in determining whether a claim is directed to an abstract idea is whether the claim “could be performed in the human mind or by a human using a pen and paper.” Here, the ‘298 patent described that a human could manually perform the first two selection criteria claimed for identifying errant files. The court used this admission in concluding that the claim was abstract.

It would have been better if the ‘298 patent did not describe that any of the selection criteria could be performed manually by a human. Generally it is good to describe alternative versions and ways of implementing your invention in the patent application. This can help broaden the scope of protection offered under the patent claims.

However, when the invention is computer implemented, describing that any of the steps could be done manually or have in the past been done manually by a person, could be used against you in a patent eligibility challenge,