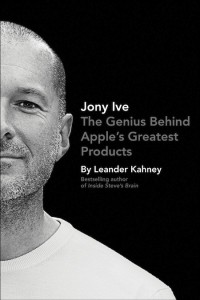 Jony Ive is the subject of Leander Kehney’s bookÂ Jony Ive: The Genius Behind Apple’s Greatest Products . Steve Jobs, deservedly, Â gets a lot of attention and credit for the success of Apple products. However, Jony Ive is the man behind many of the decisions about and features of Apple’s products. Â The book is not an authorized biography. Yet, it provides insights into the product innovation process and product development process at Apple. It also demonstrates how product design alone can indicate a brand to customers.

The front face bore neither the company logo nor the name of the product. â€œWe also knew from our experience with iPod,â€ [Chris] Stringer [of Apple] explained, â€œif you make a startlingly beautiful and original design, you donâ€™t need to. It stands for itself. It becomes a cultural icon.”

“Innovation…is rarely about a big idea; more usually itâ€™s about a series of small ideas brought together in a new and better way. Jonyâ€™s fanatical drive for excellence is, I think, most evident in the stuff beyond the obvious; the stuff you perhaps donâ€™t notice that much, but which makes a difference to how you interact with the product, how you feel about it.â€

Design Should Make Technology Approachable
Apple is famous for making products that are easy to use. The handle and the transparency of the iMac caseÂ (click here for a photo of the IMac case) is discussed as an example:

â€œBack then, people werenâ€™t comfortable with technology,â€ Jony explained. â€œIf youâ€™re scared of something, then you wonâ€™t touch it. I could see my mum being scared to touch it. So I thought, if thereâ€™s this handle on it, it makes a relationship possible. Itâ€™s approachable. Itâ€™s intuitive. It gives you permission to touch. It gives a sense of its deference to you.â€

As a young boy, Jony exhibited a curiosity about the workings of things. He became fascinated by how objects were put together, carefully dismantling radios and cassette recorders, intrigued with how they were assembled, how the pieces fit. Though he tried to put the equipment back together again, he didnâ€™t always succeed.

â€œI remember always being interested in made objects,â€ he [Jony] recalled in a 2003 interview conducted at Londonâ€™s Design Museum. â€œAs a kid, I remember taking apart whatever I could get my hands on. Later, this developed into more of an interest in how they were made, how they worked, their form and material.â€

Mike Ive encouraged his sonâ€™s interest, constantly engaging the youngster in conversations about design. Although Jony didnâ€™t always see the larger context implied by his playthings (â€œThe fact they had been designed was not obvious or even interesting to me initially,â€ he told the London crowd in 2003), his father nurtured an engagement with design throughout Jonyâ€™s childhood.
…
He was constantly talking to Jonathan about design. If they were walking down the street together, Mike might point out different types of street lamps in various locations and ask Jonathan why he thought they were different: how the light would fall and what weather conditions might affect the choice of their designs. They were constantly keeping up a conversation about the built environment and what made-objects were all around them . . . and how they could be made better.