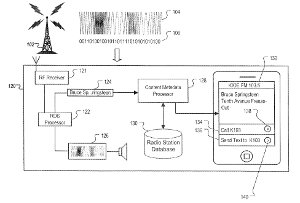 On November 18, 2010, a patent application [USPTO, PDF] owned by published showing the use of a device, such as an iPhone, to control FM radio. Other sources have noted or speculated that the iPhoneÂ  has an FM radio receiver [The Register, CNet UK, iPhone Hacks]. This patent application supports the prior reports from CNet that Apple is developing a radio app for the iPhone.

The application suggests that the FM function or App can integrate with purchasing function to allow a user to purchase a song–presumably through iTunes–that is played on an FM station, as previously suggested by 9 to 5 Mac.

To be clear, the application discloses the device, i.e. iPhone, can include a FM receiver [ see Â¶Â¶ 51, 86] however, the application does not foreclose the possibility that the FM Receiver is external to the device (e.g is an add-on accessory) [ see Â¶ 86, “Example mobile devices 701 and 702 are mobile devices that are equipped with or can be coupled to an RF receiver 121 that can receive radio broadcast and a simulcast data stream.”]