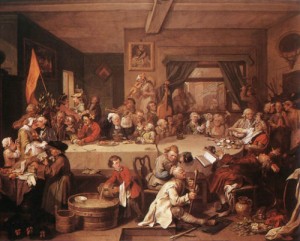 How and where are great ideas born? This is the topic of a TED Talk by Steven Johnson. Anyone interested in generating good ideas–and what business isn’t–should take 18 minutes and watch Johnson’s TED Talk.

Johnson tackles the question of what are the environments that lend to unusual levels of innovation. The popularized view of how ideas are born is that they occur to you in a flash of genus or in the middle of quite solitude or study (e.g. the fable of how Isaac Newton came up with the theory of gravity while sitting alone under a tree).

However, Johnson’s research suggests that ideas aren’t born out of solitude but rather when ideas mix in groups of people. Johnson asserts that an idea is a network–i.e. cobbled and formed from many sources. Johnson suggests that if you want people to generate above average ideas you need to provide work spaces that look more like the scene in artist William Hogarth’sÂ  “An Election Entertainment” painting. In other words, a chaotic or dynamic environment where ideas are likely to come together, and where people are likely to have new associations and ideas collide unpredictably. Johnson discusses research focused on how scientist originate important ideas. The research showed that scientist’s big idea moments were more likely to occur during weekly meeting where scientist discussed their progress, results, and problems, rather than when an individual scientist was working alone.

Johnson’s new book is Where Good Ideas Come From: The Natural History of Innovation. I look forward to reading it when its released on October 5th.