Contraband Sports LLC sells workout products, including its gloves for use in weight lifting. Fit Four LLC sent a notice of intellectual property rights violation to Amazon alleging the Contraband’s gloves infringed Fit Four’s Design patent D652,607 (the ‘607 patent). This resulted in Amazon taking down Contraband’s gloves from Amazon, “during the busy holiday season and less than one week before Christmas.”

Contraband filed suit for declaratory judgement that its gloves do not infringe the ‘607 patent. The complaint asserted the following differences, among others, between its glove and the ‘607 patent: 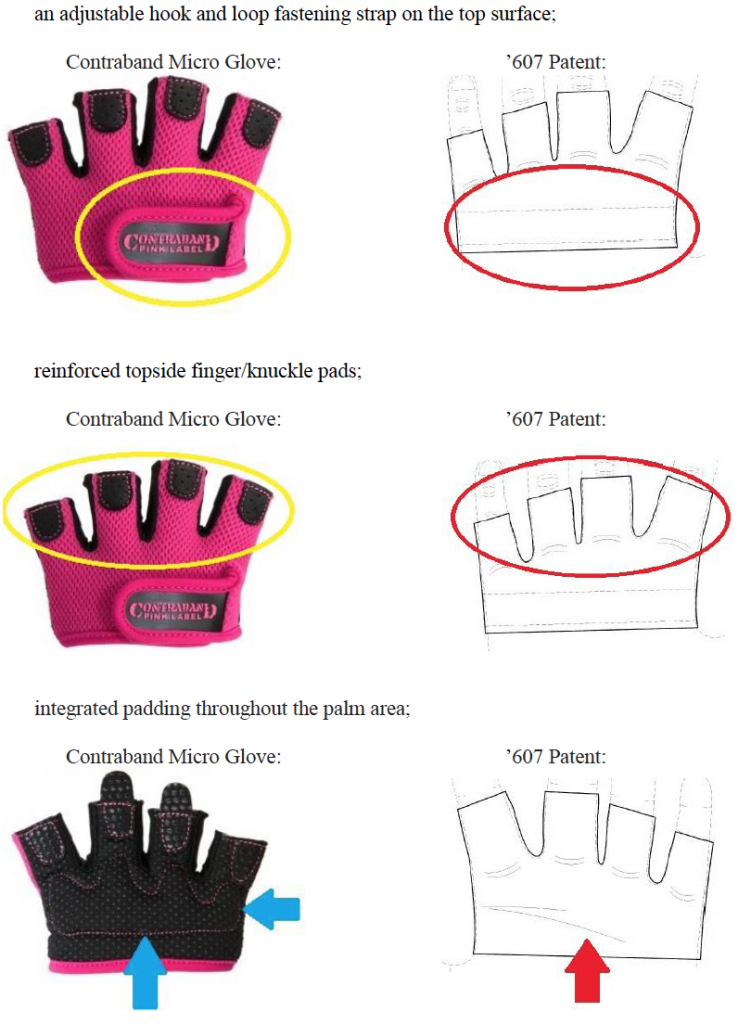 The ‘607 patent provides mostly plain surfaces on the front and back of the glove. Contraband’s gloves includes a number of design features that are absent from the ‘607 patent.

The ordinary observer test is applied in design cases to determine whether the accused design is substantially similar to the patented design and therefore infringes. The test provides: “if, in the eye of an ordinary observer, giving such attention as a purchaser usually gives, two designs are substantially the same, if the resemblance is such as to deceive such an observer, inducing him to purchase one supposing it to be the other, the first one patented is infringed by the other.â€Â International Seaway Trading Corp. v. Walgreens Corp., 589 F.3d 1233 (Fed. Cir. 2009). Also,Â â€œâ€˜when the claimed design is close to the prior art designs, small differences between the accused design and the claimed design are likely to be important to the eye of the hypothetical ordinary observer.”

A quick review of the patents cited in the ‘607 patent reveals the following prior art US Patent 1,954,262 directed to a four finger glove for golf: 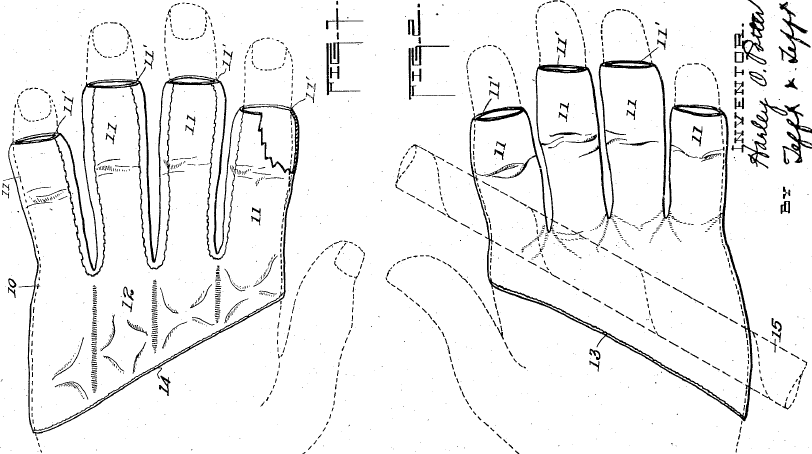 This golf glove has a distinct angled bottom edge that nether the ‘607 patent nor the Contraband glove have.

The hook and loop (VELCRO) strap, shown above, stands out in comparing the ‘607 patent and the Contraband glove. It is probably one of the biggest things standing in the way of a conclusion that Contraband’s glove and the ‘607 patent areÂ substantially the same.

Contraband likely wants it’s products back on Amazon. It might file a motion for preliminary injunction to get a early ruling for that purpose. Nevertheless, there’s almost no time to get relief before Christmas for holiday sales purposes. Therefore, it may need to rely on its pursuit of damages in this case if it ultimately succeeds in showing non-infringement.