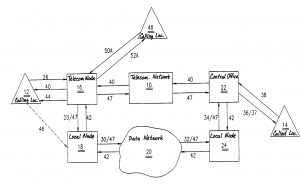 The importance of the wording of a patent claim is paramount. And, even the capitalization of the words of the claims can matter as shown in the case ofÂ AIP Acquisition LLC v. Cisco Systems, Inc., No. 2016-2371 (Fed. Cir. 2017).

Cisco Systems challenged the validity ofÂ U.S. Patent No. 7,269,247, owned by AIP Acquisition. The patent is directed to systems and methods for interconnecting otherwise incompatible telephone networks using the Internet, for example, for the purpose of placing a phone call through various networks including the “Internet or other data networks.”

But the Court said the patent applicant/owner:

“…could have claimed a specific protocol, such as the IPÂ of TCP/IP, perhaps by capitalizing the ‘i’ in ‘internet’Â and the ‘p’ in ‘protocol’ in both claims or, more definitively,Â by reciting the ‘Internet Protocol of TCP/IP.’ It didÂ not, however, and the use of lowercase letters suggestsÂ that ‘I/internet protocol’ is not confined to any particularÂ protocol.”

The court concluded that the prior art invalidated the challenged claims given the broader scope of theÂ term “internet protocol.”

The lack of capitalization was not the only thing that the court relied on to conclude the term should be given a broader interpretation. However, this case demonstrates that beyond the words themselves, even the capitalization of words in the claim can have an impact on the way the words are interpreted as well as the ultimate scope and validity of the claims.

ThisÂ is not to say that the use of lowercase “internet protocol” was necessarily an oversight by the patent drafter. It could be that at the time the application was written and prosecuted the patent applicant wanted a broad interpretation. But later when it became apparent that the claims was or might not be valid with the broad interpretation, the patent owner changed positions on the meaning of the claim.

On the other hand, it could also be that all along the patent owner intended the claim words to mean the narrower “Internet Protocol of TCP/IP” but the language chosen did not achieve that intent.