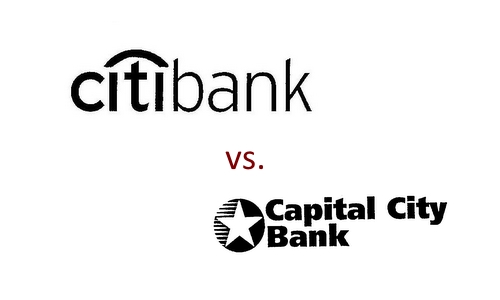 Capital City Bank filed a trademark application on its name “Capital City Bank” for banking services without a logo or special form claim. Citigroup filed an opposition based on its Citibank trademarks. Citibank presented evidence that the Citibank brand was one of the most valuable brands in the world. But, Citigroup lost.

When there was a clear over lap of “City Bank” and “CitiBank” between the marks, how could one of the most valuable brands loose?

The problem was that the court concluded that the marks were not similar for trademark infringement purposes.

Many times slight spelling differences between marks do not avoid a conflict. However, here many third partiesÂ used “city” and “bank” for financial services. In another case, a court noted evidence of 20 other banks that used City and Bank. So, the Citigroup’s right to stop the use of phonically equivalent words was cut off by preexisting third party uses.

Also, Citigroup admitted in a Ohio trademark filing that “because `City’ is a commonly used prefix for financial services corporations, Citigroup and its many subdivisions that bear the famous CITI prefix have coexisted with many`City’ entities for years in virtually every jurisdiction.”

Not a good admission for Citigroup. You can’t, on one hand, say that the use of “city bank” in “Capital City Bank” is confusing while at the same time saying that you have long coexisted with other using “city” for financial services business.

Therefore in this case the “i” vs. the “y” spelling made a difference. Yet many times it will not. Like in the case where the refusal to register XCEED was upheld based on the phonically equivalent preexisting registered mark X-SEED used on the same goods. In re Viterra Inc., 671 F.3d 1358 (Fed. Cir. 2012).

Back to the Citigroup case, the phrase “Capital Bank” was found to be the dominate part of Capital City Bank’s mark given the weak nature of Citigroup’s mark.

Defending Against A Trademark Cease and Desist Letter

What can we learn from the Citigroup case? We learn that sometimes marks that at first glance appear to be similar, are not similar for trademark infringement purposes. If many third parties had not been using “city bank” for financial services, Citigroup might have prevailed.