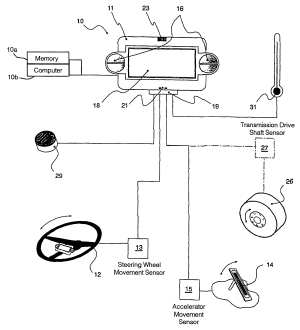 The case of Ibormeith IP LLC v. Mercedes-Benz USA, LLC, Dkt. No. 2013-1007 (Fed. Cir. Oct. 22, 2013) is another case where means-plus-function claims were found invalid for lack of an adequate algorithm/structure disclosed in the description of the patent.

Ibormeith sued Mercedes alleging that Mercedes vehicles having an Attention Assist feature infringed U.S. Patent No. 6,313,749. The â€˜749 patent is titled, â€œSleepiness Detection for Vehicle Driver or Machine Operator.â€ The â€˜749 patent is directed to monitoring conditions affecting or behavior reflecting a vehicle driverâ€™s sleepiness. Then issuing a warning to the driver before driving is unduly impaired.

Sleepiness Warning
The patent discloses monitoring that takes into account sleepiness factors including, as summarized by the court, â€œnatural body-clock (circadian rhythm), the magnitude and number of corrective steering action the driver is taking, the cabin temperature, the monotony of the road, and how long the driver has been driving.â€ The factors are â€œindividually weighed, according to contributory importance, and combined in a computational decision algorithm or model, to provide a warning indication of sleepiness.â€

Lack of Structure In Specification
The court recited the rule for means-plus-function clauses: â€œFor a claim to be definite, a recited algorithm, or other type of structure for a section 112(f) claim limitation, need not be so particularized as to eliminate the need for any implementation choices by a skilled artisan; but it must be sufficiently defined to render the bounds of the claimâ€”declared by section 112(f) to cover the particular structure and its equivalentsâ€”understandable by the implementer.â€

However the Federal Circuit found that these means clauses if the â€˜749 were not tied to a structure or defined with sufficient particularity in the specification. As a result the requirements of 35 USC 112, sixth paragraph were not complied with and the claims were held invalid.

The specification provided a formula in table 10 that provided â€œsleep propensity algorithm – definition “S mod = S circ + S zerox + S rms + S light + S temp + S sleep + S road + Strip.” However, Ibormeithâ€™s expert provided that the algorithm was not based on a simple adding of already weighted inputs. This approach was likely taken to insure that the claims were interpreted broadly enough to cover Mercedes vehicles.

The court recognized that under Ibormeithâ€™s interpretation a person of ordinary skill in the art would need to devise his or her own method for determining driver drowsiness based on the factors. The court concluded that â€œ[a] description of an algorithm that places no limitations on how values are calculated, combined, or weighted is insufficient to make the bounds of the claim understandable.â€

Drafting Tips: Provide at Least one Non-Means-Plus-Function Claim Set
This is another in a string of cases where the court has found that means-plus-function claims are invalid in technology related patents where the description fails to provide a sufficiently detailed explanation of the algorithm/structure corresponding to the means clause in the patent. It is better to avoid means-plus-function based claim limitations in at least one claim set, if any. Drafting at least one claim or claim set not including a 112(f) or 112, sixth paragraph claim avoids indefiniteness problems associated with means-plus-function claiming.