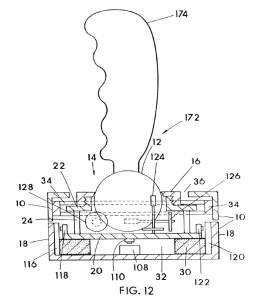 Anascape sued Nintendo alleging that Nintendo’s game controller infringed U.S. Patent 6,906,700Â (the ‘700 patent). Nintendo challenged the ‘700 patent asserting that it did not comply with the written description requirement of 35 USC 112.

The claims of the ‘700 patent were directed to a controller that received multiple inputs that were together operable in six degrees of freedom. But, the ‘700 patent was issued from a continuation application that claimed priority to a prior parent application (that became U.S. Patent 6,222,525 (the â€™525 patent)). The ‘525 patent only disclosed a single input member (controller) capable of movement in six degrees of freedom. The ‘525 patent repeatedly referenced (over twenty times) the input member as a single input member. It also disparaged the prior art devices having multiple input members.

The written description requirement is separate, and arguably more stringent, than theÂ enablementÂ requirement. Further, the courts have been strict in asserting that it is not enough to assert that claimed variation is obvious in light of what was disclosed. Rather, to be safe, the variations should be clearly explained in the description.