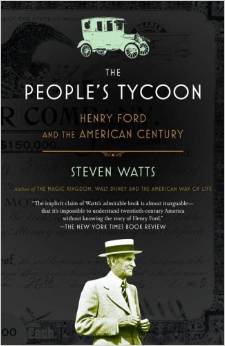 No successful boy ever saved any money . . . They spent it as fast as they could for things to improve themselves.
-Henry Ford

Henry Ford revolutionized manufacturing with the introduction of the assembly line. While many companies were selling expensive cars for the rich. Ford’s goal was to build a light weight affordable car for regular working people.

Since the assembly line might be the single most important invention in industrial history, I wanted to learn more about the man behind the company that put it to use and the circumstances around its invention. Steven Watts’ book The People’s Tycoon: Henry Ford and the American Century provides an interesting biography of Ford and history of his companies. Unfortunately, as explained below, the exact circumstances of the invention of the assembly line are not clear. But first….

Don’t be a Bigot

Ford revolutionized manufacturing not just in the automobile industry but across industries with the invention of the assembly line. I started reading this book with a desire to learn about Ford’s life and to write about the interesting entrepreneurship and business issues of Ford’s life.

But Ford espoused antisemitic bigotry and ignorance. As I wrote about the entrepreneurship and business issues, I kept thinking about how Ford’s antisemitism overshadowed all of his successes.

Watts’ has a chapter in the book entitled “Bigot,” which describes Ford’s anti-semitism. Among other instances, Ford owned a newspaper, the Independent, through which he waged a campaign against Jews. This eventually resulted in a libel suit being filed by Aaron Sapiro against Ford and theÂ Independent in 1925. Rather an testify at trial, Ford shutdown the newspaper, publicly apologized, and paid a cash settlement.

But he continued to hold and privately express anti-Semitic views. When Ford was privately asked if the idle newspaper presses from the Independent should be sold, he is reported to have said, “I made a deal with these Jews and they haven’t lived up to their part of the agreement. I might have to go back back after the Jews again.”

Watts’ says, “…[Ford’s] mindless bigotry against Jews indelibly stained his reputation and raised questions about his moral and ideological character that would linger for the rest of his life.”

A stain that lingers after Ford is long dead. Rather than posting nothing about Ford, I think it is appropriate to lead off this post noting Ford’s bigotry. A bigotry that overshadows his business successes.

Invest in Yourself – The Gospel of Spending

Twenty years after Ford launched the car that made him famous, Ford started a controversy when he insisted that hard work was a good idea but thrift was fruitless. When asked about how to become successful in America, Ford said:

“No successful boy ever saved any money . . . They spent it as fast as they could for things to improve themselves.”

This was in contrast to the traditional advice at the time to work hard and save your money. Some denounced Ford’s “gospel of spending.” But according to Watt, the dissenters were overwhelmed by publications that supported Ford’s advice on spending, with one publication saying “He who nurses the nickels misses the knockouts.”

Ford followed his own advice while developing his first prototype automobile and while building his businesses.Â An employee of a tool company, said of Ford:

[he] would be in our place two or three times a week buying something that had to do with something he was making… Mr. Ford loved anything in the way of tools, any kind whatsoever. Anything new that came out in a tool, he wanted to see it…

As Ford was making his first automobile, the Quadricycle, his wife, Clara, was concerned about his purchases:

Clara Ford became concerned about the constant purchasing of materials. As Henry’s sister Margaret recalled, Clara ‘wondered many times if she would live to see the bank account restored.’

The key here is not just spending. But, the spending must a reasonable investment in yourself or your project.

Starting It On the Side

Countless inventors and company founders started their companies and invented their inventions while working a day job and then working on the side. Ford is no exception. Ford developed his first automobile while working as engineer at the Edison Illuminating Company. Ford eventually became Chief Engineer, which meant he was on call all day, but he had flexibility and free time to “tinker, to visit machines shops, to trade tips and shoptalk with mechanics, and to experiment with improving his little gasoline engine.” He also took a job teaching metal working class at the YMCA, which gave him access to the school shop to on work metal parts for this automobile. Ford said:

Every night and all of every Saturday night I worked on the new motor. I cannot say that it was hard work. No work with interest is ever hard.

Bouncing Back from Failure

Ford failed many times. But kept going. Ford spent $86,000 (more than $2 million in today’s dollars) developing and manufacturing a car at his first investor backed company, Henry Ford Company. But he failed to produce a working production vehicle. Many say this was due to the fact that he continually changed the design of the automobile and never stopped to commit to making a particular design. Only three months after forming theÂ Henry Ford Company, Ford either resigned or was fired. That company was renamed Cadillac Automobile Company.

Ford resented control by his investors in the Henry Ford Company. Ford said “They were to stay by me to have the experimental work done…From here in, my shop is always going to be my shop…I’m not going to have a lot of rich people telling me what to do.” After gaining fame as a race car builder and driver, Ford would make another attempt at automobile manufacturing in the Ford Motor Company.

For a time, Ford did reluctantly produced an expensive car. For example, before making the Model T, Ford made the Model N, which weighed 1,050 pounds and sold for $600, the model K weighed some eighteen hundred pounds and cost $2,800. Eventually Malcolmson was forced out of the Ford Motor Company and Ford was left to pursue an inexpensive car.

The implementation of the assembly line allowed Ford to sell the Model T for $500. Ford said, “There are a lot more poor people than wealthy people. We’ll just build one car for the poor people.”

Invention of the Assembly Line

The adoption of the assembly line may be the most revolutionary change in industrial history. The idea is that the work should be moved to the worker instead of the worker moving to the work.

Before the adoption of the assembly line the best time for assembling a car chassis at the Ford plant was 12 hours and 28 minutes. By 1914, the assembly line enable this to be accomplished in 1 hour and 33 minutes.

Henry Ford’s own version of things changed. At one point, he declared that the inspiration came from observing the overhead trolley that Chicago packers used in dressing beef at the slaughterhouses. Another time, he claimed that he got the idea from observing a watch factory where parts sat on a moving belt and assemblers took them off as required.

Others offered different stories. William C. Klann, foreman of motor assembly at the Highland Park facility, asserted that the conveyors used to transport sand in the factory foundry inspired the idea of using a similar method in the assembly process.

Charles Sorensen, in a memoir written many years later, averred that as early as 1908 he and several subordinates had arranged stock parts sequentially on the floor of the old Piquette Avenue factory, put a tow rope onto a car chassis with wheels, and pulled it from pile to pile, attaching appropriate components one after another. â€œOver several weeks we developed it as well as we could,â€ Sorensen wrote. â€œThen we laid it away and put it on the shelf until we were ready to use it.”

Regarding the first use of the assembly line at Ford’s plant, Watts provides:

Evidence suggests that the first actual use of the assembly line came on April 1,1913, when workers in the flywheel-magneto department stood alongside a waist-high table with a smooth metal surface and were instructed by foremen to install one part and then slide the component along to the next worker, who would add something else.

This soon led to the idea of pulling the evolving component along at a set rate with a chain, a move that steadied the process by speeding up the slow workers and slowing down the speedy ones. By tweaking this system in various small ways over the next few months, Ford supervisors were able to cut the man-minutes required for assembling the flywheel magneto from twenty to five.

This quadrupling of productivity caught the attention of nearly all Ford production engineers, and they began to develop the technique in various areas.

The creation of the assembly line at Ford’s factory revolutionized manufacturing. However, Ford’s bigotry leaves a dark stain the part he played in this innovation.