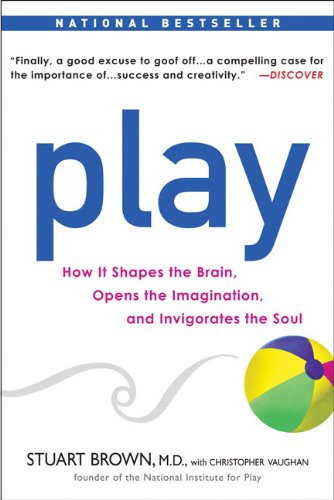 “Unlike their elders, the young engineers couldn’t spot the key flaw in one of the complex systems they were working on, toss the problem around, break it down, pick it apart, tease out its critical elements, and rearrange them in innovative ways that led to a solution.”

Scientists and engineers at Cal Tech’s Jet Propulsion Laboratory (JPL) have over the years invented and designed major components of manned and unmanned space missions. In the 1990’s, JPL began replacing retiring engineers and scientist that started in the 1960’s. However, while the new hires came from top engineering schools, the new hires were not very good at certain types of problems solving that involved taking theory to practice. What were the new engineers missing?

Stuart Brown’s book Play: How it Shapes the Brain, Opens the Imagination, and Invigorates the Soul explores the important effect that play has on our lives.

One area that play positively effects is creativity. As Brown explains regarding JPL, the new hires had excellent grades from the best schools, but that was not enough. Nate Jones, owner of a machine shop specializing in racing tires, encountered the same problems as JPL did in hiring. Jones found that employees that had “worked and played with their hands as they were growing up were able to ‘see solutions’ that those who had not work with their hands could not.”

The managers at JPL found as similar pattern. They found the older employees, in their youth, had taken a part clock to see how they work, or made soapbox derby racers, build hi-fi stereos, or fixed appliances. The young engineers that had done the same thing–worked with their hands in their youth–were good at problem solving, but those who had not, were generally not. After making this discovery, JPL managers changed their interview process for new hires to ask applicants about projects and play they engaged in during their childhood.

In view of this Brown states, “The engineers that JPL found to be so adept were the one who had played [using] their hands in their youth…They performed well as adult engineers not because they had lots of practice working on watches, but because in a sense they were doing for work what they had always done for pure enjoyment.” This is along the same lines asÂ  Paul Graham’s advice to hire programmers that write software in their free time.

Brown continues: “..there is a kind of magic in play. What might seem like a frivolous or even a childish pursuit is ultimately beneficial. It’s paradoxical that a little bit of ‘nonproductive’ activity can make one enormously more productive and invigorated in other aspects of life.”

Brown asserts that it is difficult to provide an all-inclusive definition of play, but provides that play generally has the following properties: (1) it is apparently purposeless and done for its own sake, (2)Â  it is done voluntary, (3) it has inherent attraction, (4) it provides freedom from time in that we can loose track of time in a state of flow, (5) it provides diminished self-consciousness, (6) it creates potential for improvisation, and (7) it creates a desire to continue doing it.

The examples provided by Brown may be anecdotal, but Brown is not the only one drawing the connection between childhood play and creativity.Â  If childhood hands-on play is, in fact, an indicator of future creativity, business owners and hiring managers may like to consider this factor when choosing employees or business partners.