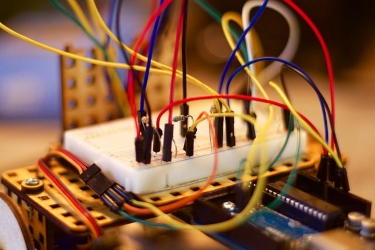 Enough Detail
If you have a general idea about how your invention would work, but if you canâ€™t describe how one important component of your invention would interact with another important component of your invention, then you may need to further engineer or prototype your invention before applying for a patent. On the other hand if you know for example your device needs a motor to operate certain components. But you are not inventing a new motor. And you know how those other components would interact with the motor, it may not be necessary to know all the internal details of the motor in order to proceed with a patent.

Multiple Patent Application Approach
The first is the most protective procedure. The first approach provides that you file a patent application on your invention before prototyping. The first application will record the details known that that time. Then prototyping proceeds. If additional details or changes are discovered or made to the invention during prototyping, then your patent attorney can evaluate whether a second application should be filed on the new material discovered or invented during prototyping. Further you can decide from a business perspective whether the new details are sufficient to justify the cost of a second application.

Prototype First Then Patent Approach
The second approach is to develop a prototype before filing a patent application. You will want to have any third parties that you work with to develop a prototype sign a nondisclosure agreement (NDA), because it is important that your invention be maintained as confidential before patent filing as explained here. After prototyping is complete, when a patent application can be prepared including any new details discovered during prototyping.

Evaluating Novelty of New Details
There are some details that might be discovered during prototyping that would not warrant a new patent application. Such details depend on your particular circumstances and invention. For example, if during prototyping you discover that the overall length of your invention should be longer than previously anticipated. That discovery might not warrant a new application. Generally the scaling up or scaling down of an otherwise scalable component that produces expected results from such scaling does not substantially impact the patentability of an invention or a feature. The exception to this rule is when the scaling was achieved when such scaling was not previously possible or thought possible in the relevant art. Your patent attorney can advise you whether any changes or invention that occurred during prototyping is likely to warrant inclusion in a second patent.

Conclusion
I often evaluate inventions to determine (1) whether further engineering is recommended before patenting or (2) whether it is recommended to file a patent application first. The approach depends on the particular circumstances of your invention and the extent to which the important details of your invention have been developed or might be further developed during prototyping.

Photo credit to flickr user Maciej Wojnicki under this creative commons license. The photo shows an electronic breadboard, which is often used to create and test prototype designs in the electronics field.